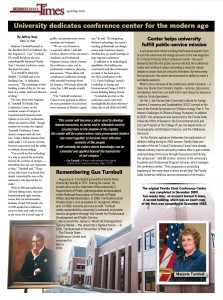 Marjorie Turnbull beamed as she described how her husband, the late Augustus B. “Gus” Turnbull III, would feel about the new, technologically advanced Florida State University conference center that bears his name.

“Gus would be absolutely thrilled,” Turnbull said at the building’s Jan. 14 dedication ceremony. “The technology in this building is state of the art. He was kind of a ‘techie’ and loved this sort of thing.”

The new, three-story Augustus B. Turnbull III Florida State Conference Center, on the southeast corner of campus at Copeland and Pensacola streets, replaces its two-story predecessor, which was razed in 2008.

Though modern for its time, the original Turnbull Conference Center doesn’t compare with the new one. Today’s facility features three video walls, LCD screens, wireless Internet connections and the ability to webcast all proceedings.

“Gus would see this technology as a way to extend the university beyond the confines of campus — something that was very important to him,” Turnbull said. “Those of you who knew Gus know how deeply committed he was to the university’s role beyond the ivy walls.”

With its 400-seat auditorium, 320-seat dining room, executive boardroom and eight meeting rooms that can accommodate between 10 and 100 people, the 47,000-square-foot conference center is open and ready to serve as the venue for a broad range of public- and private-sector events, meetings and seminars.

“We are very focused on ‘e-outreach’ efforts,” said Bill Lindner, director of the university’s Academic and Professional Program Services, which oversees the conference center and its professional conference planning and services. “These efforts will complement traditional meetings with extended meetings where, for instance, 100 people physically come, but 5,000 people actually attend.

“The Turnbull Conference Center is now prepared to deliver the next generation of customized event solutions to Florida’s capital city,” he said. “By integrating the latest technology, the center’s meeting professionals can design events with maximum impact, whether they are small meetings or large regional conferences.”

In addition to its technological capabilities, the building was constructed with the environment in mind. It has been given the Silver certification in the U.S. Green Building Council’s Leadership in Energy and Environmental Design (LEED) Green Building Rating System.